I had big plans for this evening, there was going to be major sewing, planning, projects churning out. Did that happen? Nope.
This is what I scored today... 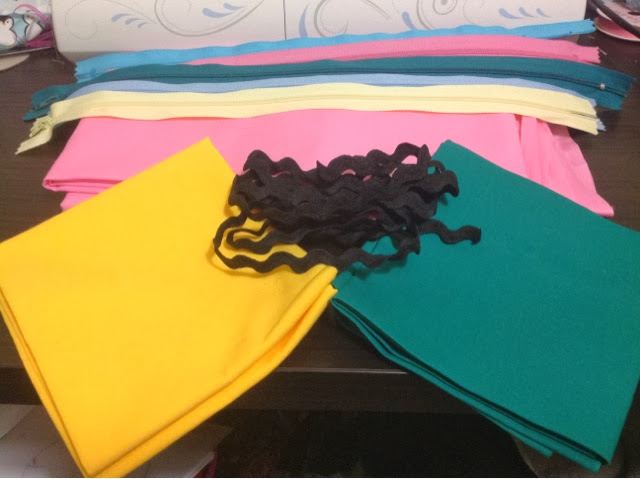 That's a metre of the pink, the other 2 are fat quarters, five 14" zips (I love zips), and 2 metres of black ric rac, I love ric rac! Though I'm not sure it its ricrac or ric rac. Ric rac looks better. I only found out about it a couple of weeks ago when I was reading someone else's blog (it was Sew Like My Mom but I don't know how to link) and went straight out on a search, I also bought my first ever pinking shears which I love!!! The man in the shop told me that they were only for bunting and if I didn't want to make bunting then there was no point in me paying out for them. I lied to him and said I loved to make bunting, then I left with my pinking shears clutched to my chest and when I got into work I unpacked them even though I had nothing to cut haha.
The zips were a bit overkill because I wanted to make a makeup bag that needed a 14" zipper on Sunday and didn't have one so the minute I got a chance I bought 5 so that it doesn't happen again for a while.
It was sausage and chips for tea! Yum yum! But not healthy at all boo. And then me and the mr caught up on I'm A Celeb from last night, I'm loving this series, some years we watch it and some we don't but its nice to have something we watch together. Mr doesn't believe Joey Essex is really that errr clever, I on the other hand have many watched episodes of TOWIE and know it to be true!
After tea we watched some Family Guy, then there was a tiny break in which I ran to my sewing machine and then it was back to the tv for tonight's I'm A Celeb. A tv night can be nice but I'm on such a sewing bug at the moment that it sort of feels like wasted time. I'm trying to chill and remember that if you work 9-6 you are allowed a little chill out time in the evenings. Still wanted to get more done though.
This is what I did in my 20 min break... 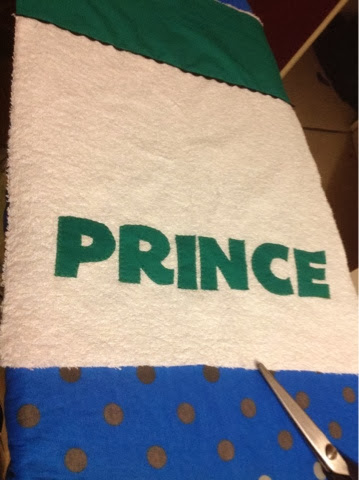 That's the front of another burp cloth, all appliquéd and ready to go-though it looks a bit uneven because of the angle, I promise it's not that bad- I'm happy with it. BUT... I wish I'd made the strip of green at the top a bit thinner but I didn't and I don't have enuf love for a do-over. If I had made it thinner I was thinking about putting another word above the PRINCE, perhaps LITTLE or FRESH. Ahhh hindsight. As I said, no do-overs here tonight.
Anyway it's getting late, so I'll leave you with a picture of the third member of my little family... 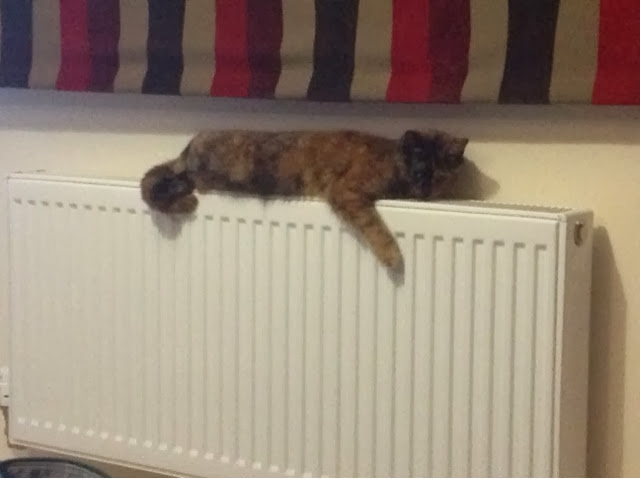 Meet Mimi, This is where she lives in the winter, the best bit is when she falls asleep and falls off :D
Happy Monday!!!
Posted by SunshineDays at 14:21

SunshineDays
I am a twenty something maker of all things I can get my hands on! I live with my fella in a much to small home filled with all things crafty (the fella is never happy about that) and I love to make new things! I'm thinking about an etsy shop but need a bit of bloggy confidence first.