So instead of moaning about the unproductive time I have been having, I decided to turn it around. It was a busy week of trying to make for the Christmas fayre, in the end we didn't do as well as we thought we would, and we did really bad compared to last year. A lot of very generous people plopped coins into the donation tub but not much of our stock moved. To be fair though, many many stalls seemed to shift very little stock and there were many unhappy faces at the end of the night. It was bloomin cold too.
We were OK, tucked up in our clothes, with our pink jammie bottoms and brig pink hoodies over the top. I have pictures but they're on the big camera, not the iPad and its getting late and I'm writing this whilst watching I'm a Celebrity so I'm not jumping up to get it onto here.
Instead I have another treat. Here is me, on the couch now in my jammies, whilst wearing the amazing hat that I bought at the fayre. My ears went from feeling as if they would freeze off to being lovely and toasty in a minute! 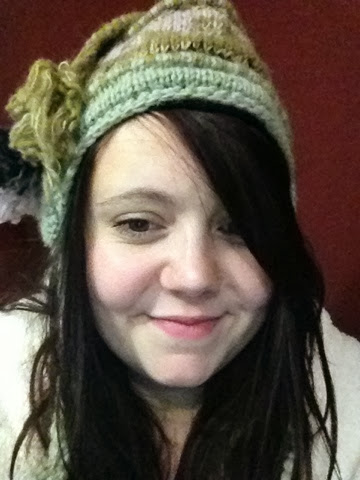 Granted, it's not the sexiest hat about, and I did get a funny look off the mr when I got back at the end of the night, but I love it!!!!! It's fleece lined and lovely and cushy on the inside. Pardon the face, it's late and I've rubbed all my makeup off ready for bed.
The lack of fayre success has made me even more convinced that I need to get an etsy shop going, we need to make some more money for the charity!!! But first I need to get really brave. I need to tell people i know that I'm writing this so they'll see and then maybe get the word about. I'm not sure if anyone would even read it if I did tell them, that worries me. I don't want to spend all this time writing it and then tell everyone I know (eg. Declare it on FB) and then either people read it and go "well that was rubbish" or never read it at all! Maybe i need to stop caring.
ANYWAY that wasn't interesting!!!! What else happened this weekend?
I bought this... 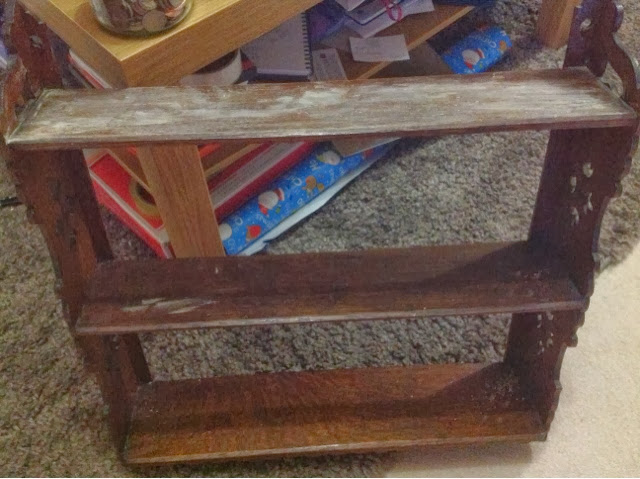 I loved this little shelf set, I bought it from Vintage Mischief, a funny sort of shed shop behind the bank. I have no idea how old it is (if anyone knows these things and reads this please do give me a hint) but it was covered in mould and spider poop and had been out in the rain all day (and goodness knows how many days before that) and it cost me £12. I wasn't sure if that was good but I took it straight down to my grandparents and my grandma said I had got a good deal.
Me and the mr have never done anything like this. He can be a little bit of a snob with secondhand things and doesn't have the make do and mend bug in any way, shape, or form. Me on the other hand? I think I have a new love.
First I wet sanded... 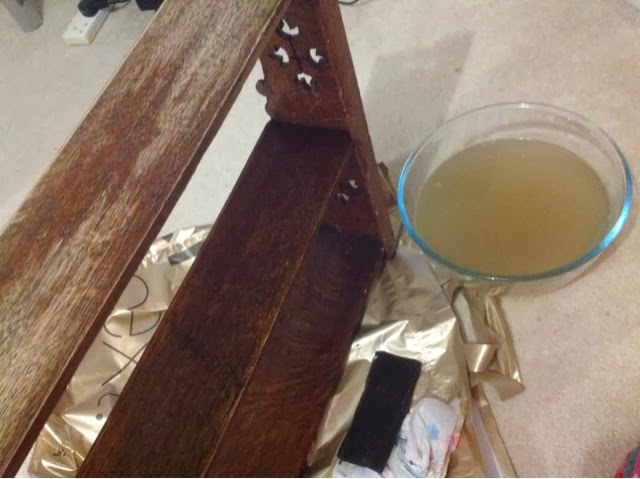 I wet sanded all night, that dirty water was after just half of the top shelf had had some love. There was a whole lot of manky on this. The spider poop came off really easily.
The next morning I painted, then I rang my grandma when it was dry and raved about how pretty it was and along came her and my grandad with a drill and lots of little nic nacs and fitted it to the wall!!! I had told my grandma that I also wanted some little hooks to hang my scissors on (this is going above my sewing table) and she brought along some hooks that had hung in their old house (before they knocked it down and built a new one on top).
She also brought a little bit of wood and I sanded that down and painted it too, then tonight after work I put that up. To say I'm chuffed is a major understatement. 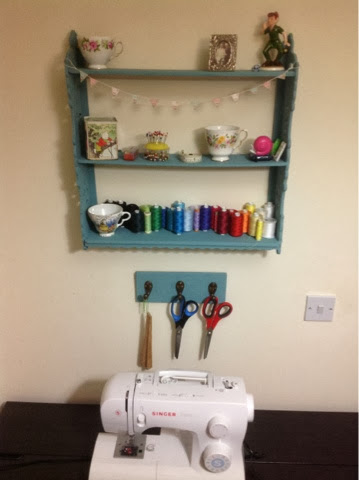 I love it!!!!! There on the bronze hooks are my red handled fabric scissors, my blue pinking shears and my paper scissors? They have gone walk about. So in their place I've hung up my little fan, but it doesn't look quite right. My paper scissors are quite rubbishy though. Just old ones that rattle a bit so I think I need some new ones for Xmas.
Gotta show you the view from the side because it is so dainty. 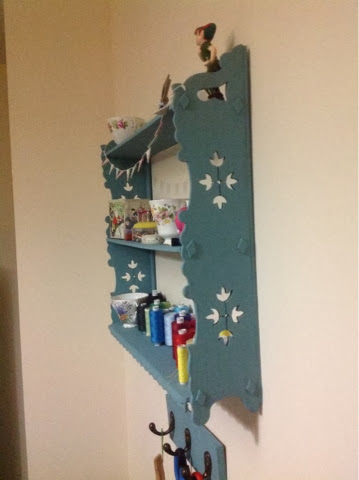 The three teacups on there are also from vintage mischief and I love them to bits! One is full of buttons (the lid on my button box has broken), another is full of beads and the third is empty but I'm planning on my making a pincushion that will snug inside it. My tape measures live on the middle shelf along with the Rupert Bear money box which I think belonged to the grandad who's no longer with us. The top shelf needs to hold more, it's not pulling its weight at the moment but Peter Pan is up there. I hope if my mum sees this she will be happy I'm taking care of Peter. I'm not sure who's he was or if he is actually precious but he was always one of the things in my room I was scared to break when I was little.
It's all my favourite but another favourite bit is my sewing thread, don't they look pretty!!!!
My grandma actually brought me 4 of those little bronze hooks and as you can see I have only used 3 in this picture. The forth is on the back of the spare room door and looking amazing up there. It was so nice to pop a bag up there and to leave it looking all neat. I'm thinking if I put hooks in lots of places then the whole house will look a bit neater!!
I think this is the start of a major love of doing up bits and bobs but I think it might have a few limits. First one being price, I'm not up for spending lots of money on things that I need to do up. The shelves were pretty cheap, I spent £12 on the shelves, the paint is left over from a wall I haven't finished painting and the fittings and hooks came from my grandparents. The second limit is the mr and his hate of all things not brand new. I have yet to find a cure for this and I have a feeling it's not coming up any time soon. So I think I can get away with shelves for the bathroom or things in our teeny spare room because they would be little enough for him to ignore. Also the spare room isn't really his territory any more. When we first moved in he had some crazy idea it was going to be his gym. I wasn't convinced of this and then on top of everything his weights bench (which I will put on eBay when I get a chance) wouldn't really fit in the room. Soon it became my dumping ground, then mostly dumping ground and a little sewing area, now I just need to do a little more sorting and it will be a fully functional, cleared out, beautiful sewing room. Don't tell him that though, he still thinks its the spare room.
I hope this isn't too rambly, I'm shattered and its past bed time so I'm off to bed without proof reading, I'm sure that's never a good thing but too tired, night night everyone!
Posted by SunshineDays at 14:48

SunshineDays
I am a twenty something maker of all things I can get my hands on! I live with my fella in a much to small home filled with all things crafty (the fella is never happy about that) and I love to make new things! I'm thinking about an etsy shop but need a bit of bloggy confidence first.